Home > Who We Are > Our Experts > Lilian Pimentel 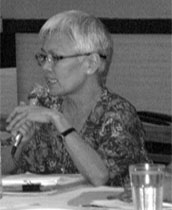 is a social development worker for the past forty years, specifically a trainer of community organizers. She was trained by PECCO (Phil. Ecumenical Council on Community Organizing) and nurtured organizers in Cebu, Bicol, Nueva Ecija and Manila who worked with the urban poor, farmers, fisherfolks and women. She mainstreamed gender in community organizing when she was exposed to feminism and Women Studies and realized that community organizing was gender-blind. Since then her involvement and advocacy is for Gender and Development. Her latest involvements were a research on the implementation of R.A. 9262 in Olongapo and Angeles City implemented by WeDpro with funding support from the European Union (EU), and with Women Crisis Center’s two projects also funded by EU (Undertaking Survivors’ Experience in Accessing RA 9262 and Justice and Healing Project). She’s currently working with the Philippine Commission on Women as Researcher-Writer Consultant for the second Framework Plan for Women (2012-2016).