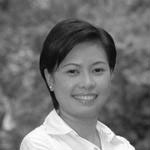 Is a member of WeDpro’s Board of Directors. She obtained her Bachelor of Arts in Social Science, Ateneo de Manila University (cum laude) and her Bachelor of Laws, University of the Philippines (Dean’s Lister). She currently teaches at UP Los Banos. Damcelle has a long list of achievement: program officer in The Asia Foundation where she assisted in the management of a large legal reform project that institutionalized court-annexed mediation and other alternative dispute resolution mechanisms; Commissioner representing the youth sector in the National Commission on the Role of Filipino Women (now Philippine Commission on Women; Legislative Officer in the Office of the Senate Majority Leader and worked on key legislative measures such as the Juvenile Justice and Welfare Act, the Automated Election Law, and the Implementing Rules and Regulations of the Alternative Dispute Resolution Act; Chairperson of the Sangguniang Kabataan in Los Baños, Laguna; host of a weekly radio program popularizing laws on women and children; a member of the Gender Justice Network, UP Women Lawyers’ Circle, Advocates’ Philippines, Ayala Young Leaders’ Alumni, and International Visitor Program Philippines Alumni Foundation. Her publications are trailblazing: co-author of two books on gender jurisprudence, “Engendering the Philippine Judiciary” and “The Davide Court and Its Contributions to Gender and Jurisprudence” (UP Center for Women’s Studies, 2006); a contributor in the publication “The Shari’a Courts in the Philippines: Women, Men and Muslim Personal Laws” (Pilipina Legal Resource Center, 2003) and co-author of “Court-Annexed Mediation, Summing Up the Past and Charting the Future” published by the National Judicial Institute in A Sourcebook on Alternative Dispute Resolution Mechanisms (2008). At a young age, Damcelle was already actively involved in promoting women’s rights; in high school, she organized teen-agers from public schools to form the Young Women as Voices of Empowerment in Science (YWAVES) that encouraged female students to pursue careers in science and technology. Damcelle is also founding partner of the Javier Santiago Torres & Gorriceta Law Office.