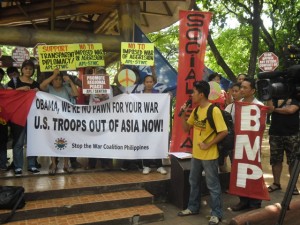 (Amidst the sounds of fury over the Southeast Asian Sea)

The contending states claiming territorial jurisdiction over sections of the ‘Southeast Asian Sea’ are only heightening regional tensions to a frightening degree. In particular, the contentious row between the Philippines and China is being amplified by certain quarters to a near-conflict level for seemingly nationalistic, but in fact chauvinistic reasons. And as the almost daily sounds of fury raise the stakes for the region’s masses of humanity, many more sober voices of concern must now come out to be heard and not be silenced by the saber-rattling of a deluded few.

Southeast Asia’s regional security environment faces a clear and present danger. The Manila-Beijing standoff emanating from their rival claims to the Southeast Asian Sea must urgently be turned around and be resolved through a process of open diplomacy between the two nations. Both sides need to do so swiftly in order to avert a possible scenario of military confrontation affecting the wider Asia-Pacific region. If this happens, it would only cause a massive blow to the Philippines—its peoples, the economy and society at large.

Undoubtedly, today’s international situation is highly fluid and volatile. The global capitalist system remains dominated by an elite few and its economic and political control over the world’s social majority is primarily upheld by a corporate-driven and profit-oriented neoliberal paradigm. But ever since last year’s worldwide mass upsurges of the global poor, the 99% was able to directly challenge the exploitative and oppressive rule of the 1% across many regions of the world. Yet still, the world continues to dangerously swing from one economic crisis to another, from one toppled regime to the next, and from one war of aggression to yet one more.

And here in the Philippines, the PNoy regime is now seemingly driving our country into a potential state of war with China. Malacañang’s over-reactive pro-US imperialist foreign policy stance is needlessly provoking Beijing into taking a more belligerent attitude towards Manila. Instead of initiating and pursuing a long-range strategic foreign policy thrust premised on the universally acknowledged internationalist principles of sovereign independence, humanist solidarity, people-centered development and progressive self-determination, the PNoy regime is merely maintaining a century-old dependency track in managing our external relations.

At the same time, China must also be firmly admonished for its increasing militarization and power-bullying of other regional claimants in the Southeast Asian Sea. Beijing must realize that the only long-term comprehensive resolution to the regional crisis is through a regionalized multilateral approach which does not have to involve the world’s chief imperialist power, the United States. If China adheres to regional cooperation, it can reap more respect and friendly allies from around its neighborhood without having to impose its powerful might to justify its ends.

In the meantime, the United States is now re-positioning and enhancing its forward power-projection capabilities around the broader Asian region with its aggressive foreign policy framework of an ‘Asian Pivot’. This explains why Washington continues to remain actively involved within the ASEAN Regional Forum’s (ARF) political-security dialogue process, which also includes China and all the ASEAN member-states. Yet given this context, a parallel regional dialogue mechanism which only involves the ASEAN, China, plus other interested and concerned Asian states, can already be initiated and set up to specifically concentrate on resolving the Southeast Asian Sea dilemma without Washington’s undue influence, as is the case with the ARF approach.

Nevertheless, the collective voices and actions of the many all around the world have already been able to progressively change and radically alter the course of the early 21st century. The masses in many parts of the world, such as in Latin America and the Middle East, are now marching toward a more consciously self-determined history to further liberate humanity from imposed wars of aggression and systemic misery. It is this same fundamental spirit that should greatly guide all the peoples living within and around the Southeast Asian region, including its large neighbor China, to always and consistently strive for genuine peace and freedom for the larger regional community of states and societies. This we must do if we all are to principally advance and eventually establish our common vision of a regionalist community within a truly internationalist world order.

Therefore, it is for this principled reason that we are all gathered today to stand together as one united voice concerned for our region’s peace and progress. We are now collectively and loudly voicing out our immediate and urgent concerns about the presently tense and unstable regional security situation and for it to be directly resolved through a transparent mode of diplomacy. To reiterate, we do not want any open military confrontation to break out between China and the Philippines in relation to the Southeast Asian Sea problem. And we certainly do not want the US to intervene in any way because its priority strategic agenda will never be in favor of Manila or the Asian region as a whole, but always in line with Washington’s global hegemonic schemes for world capitalist domination. We also believe that the claims to the contested Southeast Asian Sea can be equitably resolved through open diplomacies of all governments concerned, under the framework of regional cooperation and sharing, than through gunboat diplomacy or open war, where only the powerful nations stand to gain.

Finally, as we all add our voices of concern to this regional problem, we must remain open-minded and critically discerning of the constantly changing conditions that led us to this situation in the first place. We must always pursue a collective regional approach that fosters peace and cooperation. We must not allow ourselves to be used as a ‘provocation agent-state’ for or against another neighboring state, lest we really aim to ignite a broad Asia-Pacific war with horrendous consequences.

Thus, we raise our voices today to say that this is what we shall never allow to happen. Standing united as a broad progressive front, we shall exert all possible efforts to oppose and stop any future conflict or war from breaking out as a result of misplaced national-chauvinist reactions from both sides to this impasse. We must not wait for tomorrow to pass. Let us all act today to block the road to a potential regional war fanned by heated passions over rocks and shoals. Let us now mobilize and support all moves for transparent diplomacy in combination with mass pressure from below and across the region. ###